Last week the Statesman Journal published two opinions on the plans to build a fish passage at Detroit Dam.  Then OBP hosted me, and Conrad Gowell to discuss our opinions. Here is the link to the conversation:

As we know this is a complicated issue and it will continue to take time to work through the plans and concerns. Please know this issue has a high priority in my work as your County Commissioner, and my door is always open to hear from you on this subject or any other that affects our livability in the mid-valley.

Monday morning, June 2 at 9 a.m. I will be sworn in as Marion County Commissioner, and I invite you to attend the ceremony and reception immediately following. Here is your invitation: 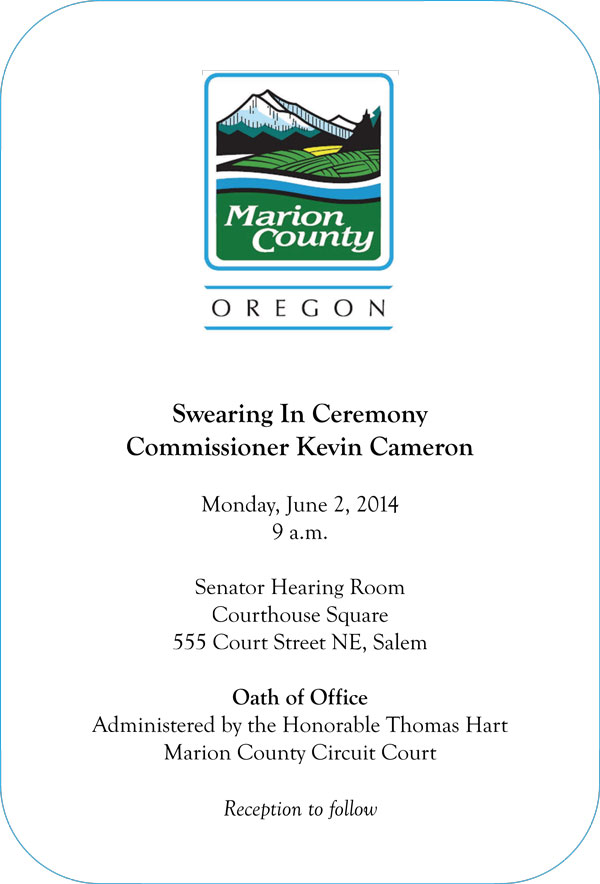 I look forward to celebrating this occasion with you.
Kevin

At 1PM today, March 4, 2013, Republicans from the House and Senate released the Republican Leadership Budget Blueprint.

Key differences between the Republican Blueprint and the Co-Chairs’ Budget include:

– The Republican K-12 proposal reverses the trend of less and less for education as a percentage of the state budget;

–  Republicans prioritize saving for the future and possible downturn by funding the Rainy Day Fund and Ending Fund Balance.

“We developed this blueprint in the spirit of co-governance, which produced the most fiscally responsible budget in many years,” said Rep. Dennis Richardson (R-Central Point), Vice Chair of the Joint Ways and Means Committee. “Our budget continues bipartisan reforms that were put in place in the previous biennium. It also recognizes savings from PERS reforms that the Governor and key education groups are asking the Legislature to adopt.”

Republicans say they’ll continue to work with Democrats on developing the final 2013-15 budget, but expressed concerns about the Democratic Co-Chairs’ budget outline.

“The Co-Chairs budget is balanced on assumed tax increases, assumed cuts to our corrections system and cosmetic PERS measures that merely kick the can down the road,” said House Republican Leader Mike McLane (R-Powell Butte), a Ways and Means member. “We’re prepared to work with Democrats on a budget that doesn’t hurt our economy or our public safety, but one that sustains services throughout the biennium. Republicans will work to make K-12 schools the highest priority in the state budget, and we’ll continue to call for reasonable PERS reforms that help our school districts over the long term.”

Your Community Partner a CCTV program hosted monthly by Commission Patti Milne can now been viewed on your local Comcast station.  This month’s program features Representative Cameron.  Watch the program as he and Commissioner Milne discuss the challenges, priorities, and issues facing the 2013 legislative session.   The program will air starting January 30th and running through February 27th.  Check your local Comcast station for the schedule.

SALEM— House Republican Leader Kevin Cameron (R-Salem) had the following to say regarding the June 2012 economic and revenue forecast:

“The June forecast, once again, demonstrates the importance of prudent budgeting. As Oregon’s revenue picture remains cloudy, House Republicans are committed to controlling state spending and setting aside reserves to protect critical services.

“Today’s forecast is concerning because Oregon’s economy isn’t producing enough new private sector jobs. Investment income is weaker than expected and personal income tax revenue has fallen. It’s clear we continue to have a jobs problem, especially in communities outside Portland that are falling further behind.

“House Republicans will continue to focus on solutions to grow the economy, including supporting Oregon’s small businesses and reducing the tax burden on working families. Promoting private sector job creation and increasing Oregonians’ personal spending power is the only way to lift Oregon out of this economic downturn and generate more resources for schools and public safety programs.”