The citizen’s of Marion County acquired their newest Commissioner – Kevin Cameron Monday morning, June 2. The oath of office was administered by the Honorable Judge Thomas Hart, Marion County Circuit Court, as his wife Judy stood by his side. The room was filled with many friends, family and dignitaries including Commissioners Sam Brentano, Janet Carlson, Sheriff Jason Myers and DA Walt Beglau.

Kevin Cameron, formerly Representative, was appointed to fill position 1 on the Marion County Board of Commissioners vacated earlier this spring by Patti Milne.

Commissioner Cameron shared: “The first 60 days of my tenure will be focused on learning more about the employees, departments and operations of the County. Additionally I will be meeting with business owners, citizens and other leaders to listen and learn how the County government can better serve the needs of our citizens.”

Commissioner Cameron will fill this position through early January 2015. He is the Republican candidate in this fall’s general election and if elected to this office he will continue through the next term which begins in January 2015. 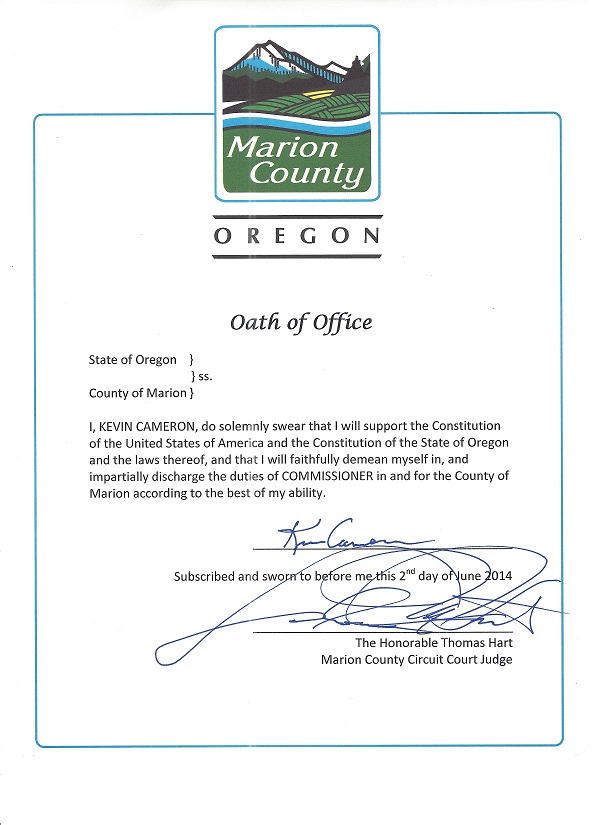